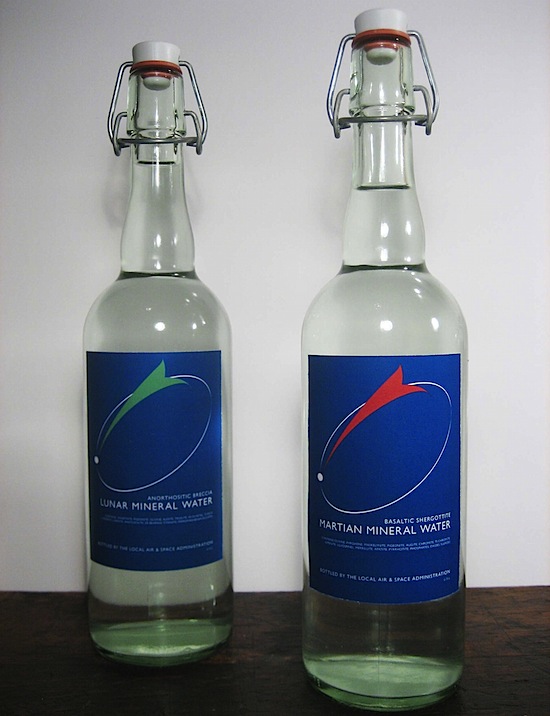 Artist and philosopher Jonathon Keats strikes again. This time with a space tourism agency launching in affiliation with California State University, which will be bottling and selling lunar and martian mineral waters. His full press release after the jump. Awesome!

An opening reception for the Local Air & Space Administration’s exotourism bureau will be held at Modernism Gallery in San Francisco on October 21, 2010 from 5:30 to 8:00 PM..

The Local Air & Space Administration (LASA) has successfully landed two astronauts on the rocky soil of a Kuiper Belt asteroid, and sustained them in good health for three full weeks, less than five months after the Obama Administration made travel to asteroids a national priority. Headquartered at California State University’s rural Chico campus under the direction of experimental philosopher Jonathon Keats, LASA has outpaced the National Aeronautics & Space Administration (NASA) by an estimated one to two decades, on a budget in the low three figures raised primarily from private sources.

“We did it by reversing some key assumptions,” confides Mr. Keats, whose previous experience includes exhibiting extraterrestrial abstract art at the Judah L. Magnes Museum. “Instead of bothering with expensive rockets and liquid oxygen, we let the asteroid come to us. Not all of it, of course, which could be dangerous. All we require really is one hefty meteorite.” Mr. Keats prepared the asteroidal soil by smashing the meteorite with a hammer. He then planted his two explorers – a pair of small succulents accustomed to rocky terrain – in pots of pulverized asteroid with a supply of distilled water for a 21-day mission. “The cacti encountered the asteroid by osmosis,” Mr. Keats asserts. “For 21 days, they lived as alien beings. That’s more than Neil Armstrong ever did.”

Next month, LASA will attain two more coveted NASA goals decades ahead of schedule, launching simultaneous missions to the Moon and Mars. Having accumulated a small amount of lunar anorthosite from the meteorite NWA 482, and martian shergottite from the meteorite NWA 1195, the space agency will dissolve the anorthosite and shergottite to produce lunar and martian mineral waters in which thirty new astronauts will be raised. “These explorers will be potatoes,” Mr. Keats reveals. “They’ll each be suspended in a cup of extraterrestrial mineral water on toothpicks.” A third mission will bring select potatoes into contact with other stars, burnt-out suns that supplied the raw materials for our solar system, remnants of which are preserved as nanodiamond in rare carbonaceous meteorites. Launching October 4th, and open for public observation on weekdays, these three missions will serve as preparation for a return to the Moon and the first experience of Mars and
other suns by humans on October 21st.

“Richard Branson’s Virgin Galactic has been offering $200,000 tickets for five minutes of suborbital flight with a 2012 launch date,” says Mr. Keats. “We don’t see why people should have to wait so long to experience so little at such a high cost.” Situated at Modernism Gallery in San Francisco, LASA’s exotourism bureau will employ the revolutionary technology Mr. Keats developed for succulents and potatoes. “Humans aren’t so different from plants. People can just drink up the mineral water, and absorb these alien environments.”

Conveniently bottled for enjoyment in the comfort of home, 750 milliliters of lunar exploration will be reasonably priced at $30. A bottle of martian mineral water will sell for $45, and stellar mineral water will retail at $60. Package tours to all three destinations can be arranged for $125. (LASA will provide complimentary bottles to members of the Google Lunar X Prize judging committee upon request.)

Even after next-generation spaceships start shuttling people to other planets in future centuries, Mr. Keats believes that LASA’s methodology will still be superior, and not only in terms of cost and convenience. “Other technologies may get you to alien realms, but you’ll always be an outsider,” he explains. “However if you imbibe our lunar or martian mineral water, the anorthosite or shergottite will actually be incorporated into your body. As you explore the alien, you’ll become alien in your own right.”