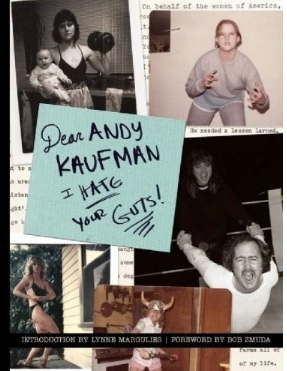 Andy Kaufman was before my time but if what I read about this feud with Jerry Lawler and that “Man on the Moon” movie were any indication, this guy was a walking laugh factory. He blurred the line between the stage and his personal life and often times it was difficult to figure out if he was serious or if you were a victim of yet another one of his pranks. Perhaps one of his most controversial stunts involved challenging women in a comedy club to come on stage and wrestle him. He offered a $1,000 reward to any lady that could successfully pin him. He taunted the women with some pretty sexist, but admittedly hilarious, remarks. It’s clear if you understand Kaufman’s sense of humor that he was simply trying to entice them to join him.

Legions of women from across the country responded to the call, resulting in a barrage of hate mail (and love letters) from would-be contenders. Kaufman kept all of them and two of his colleagues Lynne Margulies and Bob Zmuda have compiled them into a book. “Dear Andy Kaufman, I Hate Your Guts!” is available Dec 1. From the preview I’ve seen, it does not matter if you were around when Kaufman was ruling the comedy circuit. You just need a brief intro into his wrestling stunt and then the pictures and letters do the rest to paint the picture of a legend.